Skip to content
Previous Next
4 Observations From the Intersection Conference

4 Observations From the Intersection Conference

As the director of the new Telos Lab for Congregational Discovery, I view the recent Intersection Conference not only as an event we must craft and execute well for our constituency, but also as a space where we can be curious about ourselves and how God is leading us into the future through joining with our people.

As the Telos team debriefed about what we experienced during the conference and then heard from the post-conference feedback forms, four observations distilled to the top that I want to be curious about as we move into the future.

We are all grateful for how technology facilitated our ability to meet together amidst a global pandemic and for how meeting online made it possible for many leaders to join us who would not have been able to join if we gathered in person.

At the same time, we all sensed that even virtual connection done well is no substitute for embodied connection. This is because we’re not merely dealing in the transfer of information or in the projection of an image of ourselves to be viewed and consumed.

We don’t want merely to create good content. We want to cultivate belonging, where a faithful way of life can be seeded and watered through generative sharing, grounded in a vision for the Gospel of God’s Kingdom in Jesus Christ. Our aim at Telos will always be angled toward embodied connection.

Before the conference began, a friend mentioned the main reason he looked forward to our gathering was everything that happened in-between the programmed parts. He looked forward to the conference, but not as much as in the three years past because of what a virtual format cannot do. In the survey feedback, several attendees echoed a similar sentiment saying they enjoyed the content but missed all the bits of serendipitous space that forms connective, relational tissue.

The experience that often leaves a lasting impact on attendees are not the elements that the organizers spend the most energy and resources curating, like the plenary sessions. The in-between space is just as meaningful and formative as the programmed space. The in-between is not an additive – not merely icing on the cake – but an integral part of a mutually reinforcing whole.

Many attendees said the breakout sessions were the most meaningful part of the conference. Attendees cited their appreciation of group size, diversity of perspectives, meeting leaders from other parts of the world, and vulnerable, Spirit-led conversation.

Truthfully, I was unsure about how people would experience the breakout sessions. We knew creating breakout space was important, but the logistics for managing discussions online were tricky. An online platform meant less control over guiding the discussion and populating groups. I was also keenly aware that breakout attendance in previous years was spotty and that people’s experience in breakout discussion was mixed, in some instances plainly bad.

This is why I was surprised to find that the feedback from this year was overwhelmingly positive.

Not everyone experienced the breakouts in completely positive terms, of course, but even the critical feedback gestured toward a longing for dialogical space where meaningful sharing can happen. I’m curious about how better to curate meaningful space for sharing with safety for vulnerability and just enough structure for organic life to grow without force. Difference of perspective and context is important so as to avoid an echo chamber, yet there also needs to be enough shared vision for the telos (!) of ministry for the conversation to be generative and not merely show-and-tell.

Each year, the Intersection Conference focuses on one of our six core values: Gospel of the Kingdom (2017), Cultural Engagement (2018), Missional Ecclesiology (2019), Missional Leadership (2020), God’s Empowering Presence (2021), Spiritual Formation (2022). But after four years of gathering, we are beginning to develop a distinct “voice” that attendees both notice and have come to expect.

The feedback this year aligns with what I’ve been hearing for several years now. Our voice registers in a key that draws together leaders seeking space to forge fresh vision for leading at the intersection of Gospel faithfulness and missional engagement. Most of our attendees are serving in the Anglican tradition, but, increasingly, like-minded leaders from other traditions are listening-in and adding their voice, too.

A few particular themes emerged again this year that are becoming common to our conference grammar: (a) Jesus’ posture was non-anxious, operating confidently in the kingdoms of God, and that informs our posture, too; (b) missional engagement in the way of Jesus must discern the difference between worldly power and cruciform power; (c) Social justice and racism are central concerns for the church joining God’s mission, and we (Anglicans, in particular) have work to do.

But the distinctive voice goes beyond content. Conference attendees seek a voice that is not merely academic, but one that has the wherewithal to stir imagination for living and leading differently in diverse ministry contexts. Our voice includes what we talk about but also how space is held for people to listen and give voice themselves.

Our voice includes what we talk about but also how space is held for people to listen and give voice themselves.
Click To Tweet

Let’s Get Curious Together

Overall, I am most curious about how we can continue to cultivate contextual content that funds imagination for new, embodied ways of living and leading. I’m also curious about how to seed and water ongoing points of connection so we can avoid the “post-conference effect” and truly metabolize fresh ideas in the concrete of our ministry setting.

The Telos Lab for Congregational Discovery is designed specifically to partner with you in your local context and dig into important work like this.

What about you? What are you curious about?

I really would love to hear, and I know our new Executive Director JR Rozko would, too. 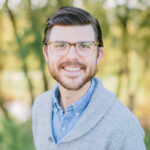 Seth Richardson is the Director of the Telos Lab for Congregational Discovery. He has served as a priest in both the Anglican Mission and Church for the Sake of Others. Currently, he and his family make home in the Ozarks Mountains of Northwest Arkansas.