Skip to content
Previous Next
Wisdom at the Crossroads: Engaging the Next Generation Through Art and Psalms

Wisdom at the Crossroads: Engaging the Next Generation Through Art and Psalms

Engaging culture through the arts is one of the topics we’ll be discussing at the 2018 Intersection Conference in just a few short weeks.  Preparing us for that conversation, Jeremy Bryan of Christ Redeemer Milwaukee shares his experience as a “rapping psalmist,” and how he’s seen countless young people engage with God through the art of hip-hop verse.

Downtown Kansas City, Missouri. A Midsummer’s eve, hot and muggy. Thousands of people are streaming through the streets, in and out of art galleries, to and from food trucks and artisan display tables.

Two men (one White and one Black), a singer (a young Black woman), and a mixed-race muralist are standing on a prominent corner in the Crossroads district, playing music and painting. A crowd gathers. You join them. The music fades. One of the rappers asks the audience: “What is art to you?” You move closer. Someone near you yells out: “Art is connection!” Another: “Art is freedom!” A third: “Art is beauty!”

A metronome begins clicking. Then, drum sounds. Someone is pounding out a rhythm on the rubber pads of a drum machine. One of the MCs begins to chant: “When I say ‘Hip,’ you say ‘Hop’!” Feeling more warmed up to the moment, you chant “Hop!” along with the hundreds of people around you. Then, one of the MCs begins to freestyle rap about beauty and how it creates vital connections between people through art, imparting to us all a feeling of freedom, a sense of shared humanity through aesthetic experience. The crowd around you, as if enacting the words being spoken, begin undulating to a common rhythm. The other MC and singer continue to riff on these themes with fresh observations and melodies. The freestyle fades. The muralist behind them depicts a chaotic city scene with the profile of a young Black woman rising up with a microphone at the top of the swirl, giving voice to something transcendent. She looks a bit like the woman singing between the two rappers. You are stirred, somehow, wondering what inspired this event.

After the applause, most of the crowd begins to move on, returning to the human flow. But you, along with a few friends, linger. You approach the artists, who are now taking a break. You want to voice your appreciation. And you have a question…

This is a description of a live outdoor performance I gave in the summer of 2017 with a hip-hop group I cofounded. We improvised  (“freestyle” in hip-hop terms) about the nature of art for two-and-a-half hours, interacting with thousands of passerby who incrementally gathered. It was exhilarating and exhausting, but deeply fulfilling. The arts organization that hosted us was excited by the turnout, the energy, and the way we were able to embody their vision for the evening. 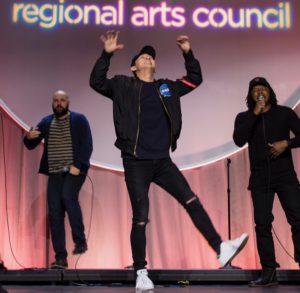 One of the goals of our group is to bring the heart of the psalms to life through hip-hop verse and music. Both MCs of the group—myself and Samuel “Beloved” Smith—cut our teeth as young worshipers in settings where “freestyle” songs that sprang from Scriptural themes and passages were encouraged and featured. In these spaces, rap was considered a vital, even primal, expression of praise, lament, inquiry, and more. Our mentors found ways to include our voices as rappers—even before we were sure what we believed and what we were saying—as part of our discipleship journey. Over the years, separately, we’d each become “rapping psalmists” in these environments, learning how to collaborate with others while encountering and worshiping God through hip-hop verse.

Rap was considered a vital, even primal, expression of praise, lament, inquiry, and more.
Click To Tweet

When we met and started writing songs together in 2016, we noticed that many of our verses were addressed to God—rather than to self or neighbor—and as such, invited the listener into a prayerful, psalmic dialogue. We soon began to tour public schools with our music, and we were surprised (okay, shocked) at how receptive the youth and educators were to these honest prayers presented in song. We also performed fun dance songs and inspirational tunes with anti-bullying themes, but the kids resonated most, time and again, with the psalmic songs and themes. Later, when we’d ask the kids what they wanted us to freestyle about—we make up songs on the spot in these settings as well—they would say, unbidden, “God!” and “Jesus!” Just as often, we’d be asked to rap about “Unicorns!” or “Money!” as well. The theme combinations made for some very interesting and entertaining improvisational songs, as you might imagine.

Months later, the arts org that had booked us for that outdoor summer event asked if we’d present an original song in front of about 1,000 business and arts leaders at a prestigious awards show in the city. With nervous excitement, we accepted. We chose one of our songs that embodies a psalmic dialogue, and poses honest questions about the meaning of personal identity and the nature of “home”—“Is it a place? A people? Can we ever really find it?” The musical and lyrical movements throb with gospel and blues impulses in equal measure (“Better is one day in your house” is chanted zealously while a pleading “Do I have a home in you?” is sung simultaneously).

Despite any anxiety that our arts-missionary covers would be blown, we felt emboldened to do this song. We were also encouraged by the fact that some of the most popular hip-hop acts in the world—Chance the Rapper, Kendrick Lamar—were addressing gospel themes with profound honesty on their latest records. So, we arrived backstage to practice and pray.

After the “Voice of God” intro, we stepped onto stage and stared out at the eclectic audience of artists, businesspeople, and educators. As the music began, hip-hop dancers who’d choreographed a dance to our song joined us. The hip-hop beat dropped, and history was made (we were the first “urban” artists to have been featured at this long-running event, and I’m guessing the first gospel artists as well). Many were deeply moved, and of this writing, we’ve been invited to do this same song at an event celebrating volunteer mentors for their great work in public schools.

I share these stories because there is a generation that needs to see and hear deeply honest art that carries the good news of the Gospel in fresh and refreshing ways. We serve a Loving Creator whose Incarnation into human flesh-and-feeling convinces us that we are his masterpiece, living letters, embodied psalms, full of questions and heart-cries, but with the real hope that we are felt, known, heard, and answered in our pain and dilemmas, our joys and thanksgiving, by the person of Christ.

In this way, the arts are a potent avenue for inspiring and discipling the next generation. Our group mentors many youth, who, through biblical reflection, songwriting workshops, and public service, are finding their voice as part of a universal cry for meaning and purpose. In some cases, these young people are becoming prophetic artists, worshipers, and leaders in their own right.

Though I have reason to be excited at the signs of life I’m seeing in youth and art, this kind of engagement isn’t necessarily translating into participation in the life of the local church. Including voices from a wide range of cultural expressions in our worship and liturgies is crucial if we want to see this inclusion come to pass, if we want to raise up the next generation into places of wholehearted worship and healthy community. Indeed, it was absolutely essential to my own spiritual journey and sense of connectedness to the church. It’s especially key in seeing minority millennials come into a participatory faith. Will we find room in our traditions to improvise, to freestyle, and to welcome the next generation into our community? Even if it requires that we flip the script a bit? 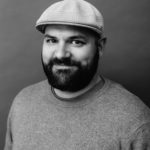 Jeremy Bryan is a teaching pastor, a kid’s musician, and a writer based in Milwaukee, WI. He has won many awards, including an Independent Publisher’s Award and a Parent’s Choice Gold Award for his writing with kid’s hip-hop group The Figureheads. He holds a Masters Degree in Liberal Studies from UW-Milwaukee and his thesis was published in the book Hip-Hop(e): The Cultural Practice and Critical Pedagogy of International Hip-Hop (Adolescent Cultures, School, and Society) which won the 2014 AESA (American Educational Studies Association) Critics Choice Award.