Skip to content
Previous Next
Beyond Conflict: Science, Culture and Christ

Beyond Conflict: Science, Culture and Christ

Does opting for science mean excluding religion? Anglican physicist Paul Julienne says this widespread cultural misperception needs to be addressed. A key to cultural renewal, he believes, is the right relationship of knowledge and love.

As an Anglican lay person whose professional career has been in the sciences, I see the relation of science and religion as a major aspect of Christian engagement with culture.

You may have heard aggressive “new atheists” make unsustainable claims about science and religion. A picture of conflict between these two is rampant. It is a statistical fact that many young people leave the faith due to the common cultural assumption that opting for one excludes the other. This widespread misperception needs to be addressed with honesty and intellectual integrity.

There are many Anglican voices doing this, including Scot McKnight, a speaker at the 2018 Intersection Conference. He recently co-authored a book Adam and the Genome that deals with how Christian theology can read the Bible, especially Genesis 1-3, while taking account of findings from genomic and evolutionary science. Scot’s literary reading, which is neither mythical nor literal, establishes important guidelines to keep in mind. It represents an essential step in the right direction. I share a passion with Scot that young people (or anyone) not lose their faith because of bad teaching about the relation of science and faith. The relation is more subtle and significant than one of conflict.

Support for a Christ-Centered Cosmos

As a scientist, I see that what science actually knows about our cosmos is far more compatible with the story of Reality told in Scripture and revealed in Christ than it is with any metaphysically reductive view of science. Our culture needs a saner and more balanced view of the God-world relationship, for it stands behind our imaginative grasp of the reality by which we live. Is there a God? If so, what is God like? Is this sensible world all there is? What is human life? Is there any meaning to my life? How should I act—what is right and what is wrong?

We all have at least implicit and intuitive answers to such questions, whether we are consciously aware of them or not. Science does not answer such questions, nor can it, and only a false scientism could claim otherwise.

As contemporary Christians, we need to be as confident and bold as Augustine of Hippo was in affirming the cosmic significance of Christ: in the “beginning” was the Word, the Logos, the very “logic” and Reason of all of Reality. It is fundamentally a logic of love, with love defined by Christ and his ways, not by humanity and our ways. I say this as a scientist, knowing the scope of what science has disclosed about the cosmos from tiny fundamental particle to arrays of galaxies with a long evolutionary history of development since the “Big Bang.” All things hold together in Christ, and the Gospel of peace remains good news for scientists as it does for all of humanity.

As contemporary Christians, we need to be as confident and bold as Augustine of Hippo was in affirming the cosmic significance of Christ.
Click To Tweet

Augustine’s cosmological vision set forth in his City of God drew upon not only Scripture but also the best history, literature, philosophy and “science” of his time to render an account of all of Reality.  Augustine upheld the idea of creation ex nihilo (“from nothing”) as a good creation by its utterly transcendent Trinitarian Creator.  Yet, transcendence does not exclude immanence, as Augustine put it so well, “You were more intimately present to me than my innermost being, and higher than the highest peak of my spirit” (Confessions 3.6.11, M. Boulding translation).

Many Anglican voices such as Sir John Polkinghorne and Alister McGrath have sought through many books to articulate a sound way of relating science and Christian faith. Simon Oliver, a Canon of Durham Cathedral and Professor at the University of Durham, recently wrote a book, Creation: a Guide for the Perplexed, to present clearly the classical doctrine of creation ex nihilo. This essential doctrine of Christian theism is widely misunderstood today and oft confused with a modern notion of “creationism,” a truncated misperception quite unlike the classical understanding.

I too have attempted to relate contemporary science and theology in the light of the Logos of Christ in various writings available on my Sources web site.  I have a short article specifically on creation ex nihilo, which even ends with a poem. After all, science and the arts can and should interact.

The Telos of Technology

Today a mix of technologies, especially biotechnology and artificial intelligence (AI), threaten a revolution of unprecedented power to reshape our human future in ways that are not benign. Technology defines our cultural context now. With its great potential for good or for bad, technology is a fruit of another revolution, the “scientific” one heralded four centuries ago by one of its great prophets, Sir Francis Bacon (1561-1626). Bacon called for a “Great Renewal” (Instauratio Magna, 1620) with a new “instrument” or “logic” of empirical science and its methods to replace the Aristotelian thinking of his day. Bacon gave us the aphorism “knowledge is power,” power to control and manipulate our human environment as we wish. Bacon, as well as most scientists, would see this prospect of control being used benevolently for the betterment of human life. Medical science is a good example.

But if knowledge, “science,” becomes disconnected, as it has, from any transcendent good or telos, its fruit, technology, can become a harsh taskmaster, rendering anything “good” simply because human beings can do it.  What is “good” becomes what is useful according to some immanent telos we make up because we can. But will our technology only be informed by the flattened version of Reality confined to the secular immanent frame with its telos of self-love and utility? As Augustine knew so well in his own era, we cannot forget transcendence if humanity is to flourish. We must let Christ teach us to order our loves and desires rightly.

Dare we think that we can have a Great Renewal of the human imagination for our time centered on the cosmic logic of Jesus Christ? Can the Face of God shown in Jesus draw the world to its form and telos grounded in goodness, truth, beauty, and self-giving love? To reiterate: love is defined by Christ, not by the secular order. The love of God manifested in Christ Jesus is ultimately the only good news the world has. It is good news for all people and for all time, and all knowledge or “science” can stand in its light. Conformity to the ways of Christ can only come by the attractive power of goodness, truth, and love, a work of the transcendent-yet-always-present Spirit of God.

The love of God manifested in Christ Jesus is ultimately the only good news the world has.
Click To Tweet

Can our science come to appreciate creation as a gift, a gift of love with the telos of enabling our participation in its order of being? The theology of gift is powerful. It is the Christocentric logic of the Bible. A gift calls for thanksgiving, eucharist: thanksgiving for creation itself, for my own life, for parents, relatives, friends and neighbors, thanksgiving for Jesus, thanksgiving for being able to comprehend the created order, atoms and galaxies all. Can Scripture’s Christ-centered love-song be an imaginative springboard to energize a renewal of culture where knowledge and love are rightly ordered, no longer separated?  That inspiring challenge stands at the intersection of Christ and culture. 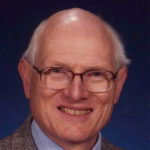 Paul S. Julienne is retired from his career as a physicist at the National Institute of Standards and Technology and the Joint Quantum Institute of NIST and the University of Maryland. He has published over 250 scientific papers on the theory of quantum processes in atomic, molecular, and optical physics.