Skip to content
Previous Next
Christ the Center: How the Liturgy Orients and Sends Us

Christ the Center: How the Liturgy Orients and Sends Us

Christendom often propagates a false dichotomy between evangelical and liturgical. The liturgy, however, has inherent evangelistic riches that have shaped worshipping communities for thousands of years. The Rev. Shawn McCain shows us how the liturgy orients all of life toward God in Christ and then sends us out into the world.

Every liturgy has a center. Whether intentional or not, it possesses within itself a focal subject and telos, toward which every action, word, and intention is directed.

Likewise, everyday life is loaded with liturgies, or habituated patterns and rhythms that possess a center. We would be even more accurate to say this liturgical center possesses those who participate, orienting them toward itself, and forming them into its likeness.

In Desiring the Kingdom, James K. A. Smith describes the formative effect liturgies have on our desires, which “are shaped and molded by the habit-forming practices in which we participate.” These liturgies, Smith writes, “shape our imagination and how we orient ourselves to the world.”

When we realize that life is filled with liturgies that are steadily working on us—drawing us into its center, shaping our desires, and furnishing our imagination—interesting questions arise, such as, “What possesses our center?” “What are our aims?”

Christian liturgy is made up of practices whose center is Christ. If the liturgy is “the church’s faith in motion,” as the liturgical theologian Aiden Kavanagh describes it, then how does the Christian liturgy orient the worshiping community and draw us to participate in its christological center?

Liturgy as Orientation to Christ the Center

Praying to the East is a Christian tradition that goes back to the early church, and expresses a significant insight into the liturgy’s orienting principle. One might rightly point out that we can address God in any direction because God is everywhere. However, we might miss the remarkable theological truths expressed in facing east. This orientation is a posture of prayer that recognizes God’s saving work in history and anticipates its fulfillment in the Lord’s coming.

Here we recognize how the prayerful use of space and bodily orientation can be reflective of deeper spiritual truths. Discussing the orientation of Christian liturgy, Joseph Ratzinger (Pope Benedict XVI) acknowledges how spatial orientation has situated the worshiping community between the “now” and “not yet” of the Gospel story. He states, “It is a fundamental expression of the Christian synthesis of cosmos and history, of being rooted in the once-for-all events of salvation history while going out to meet the Lord who is to come again.”

For the worshiping church, the direction of prayer means something only because sacred history is oriented around Christ the center. In fact, in his catechism from the 4th century, Cyril of Jerusalem tells us that baptismal candidates renounce Satan while facing the West, the direction of Egypt where God’s people were held in captivity, and the direction that Gregory of Nyssa refers to as “the place where dwells the power of darkness.” Therefore turning to Christ was represented in facing the East, not only referencing the Resurrection but the hope of seeing the Lord face-to-face when he comes again.

The liturgies of the Christian tradition are pregnant with biblical memories of the past and memories of the future, which anticipate their fulfillment in Christ. We see this christological orientation to time at the climax of the Christian liturgy: “Christ has died, Christ is risen, Christ will come again!” Space, time, and physical bodies relive this astounding news—past, present, and future—when bodies are turned toward the cross in procession, souls are humbled in confession, hearts are lifted at the altar, and hands extend God’s peace. Every announcement and action in the worshiping church is a movement toward its center.

Every announcement and action in the worshiping church is a movement toward its center.
Click To Tweet
As the worshiping church journeys toward Christ the center in the liturgy, they find they are also ascending. Like Moses ascending the mount to enter the cloud of God’s presence, or being tucked into the cleft of the rock as God passes by, the liturgy charts a dangerous journey for the assembly who by faith approach its center, where “only grace and favor enable it to stand there; only grace and promise brought it there; only grace and a rigorous divine charity permit the assembly, like Moses, to come away whole from such an encounter, and even then it is with wounds which are as deep as they are salutary.” This pilgrimage into the Holy is not some separate activity peripheral to the church, rather it is “the church caught in the act of being most overtly itself as it stands faithfully in the presence of the one who is both object and source of that faith.”

All of creation is being caught up and oriented in Christian liturgy. It is comprehensive in scope because the Gospel addresses all things. The liturgy is the enactment of the Gospel drama, calling upon the entire created order to be oriented to a new center in the Incarnate Logos, Jesus Christ (Col 1). The eastern church carries a rich tradition and imagination for the cosmic scope of the liturgy. St. Maximus the confessor understands the divine liturgy to be calling the entire cosmos to attend to the Logos. Saint Augustine calls the liturgy a res publica (a public thing or reality) because its scope concerns all things being reconciled to Christ the center (2 Cor 5:18). The entire created order is being addressed and reoriented to its true center, for whom and through whom all of it was created in the first place, and in whom it is all being held together (Col 1).

Christian liturgy is unintelligible apart from its christological center, orienting the whole of life toward God through Christ. However, being oriented to a view of Christ is never just a disconnected gaze, but leads to a most profound participation and communion.

Liturgy as Participation in Christ the Center

When Peter, James, and John ascended the mountain with Jesus at the Transfiguration they were thrown to the ground in terror because they were reoriented to Christ glorified. They were overcome with profound fear and wonder because they were caught up in the cloud of God’s presence, exposed by the radiance of God’s glory, silenced by his commanding voice, and had no place to hide.

In other words, in becoming aware of how deeply that they had been searched and known by God, they were filled with fear. The worshiping church ascends this holy mountain only to depart possessing an unintelligible sense of fear and wonder of God’s presence, and more aware of how deeply they are known only to depart in wonder. As the psalmist writes, “O LORD, you have searched me and known me! …Such knowledge is too wonderful for me; / it is high; I cannot attain it” (Ps 139:1, 6, NRSV).

The Transfiguration account is profoundly descriptive of the sacramental encounter the church has with Christ at the table. Even before the church draws near, they are searched and known, and yet still drawn to Christ beyond what they are able to understand or attain. Somewhere along the way, the liturgy has progressed from orientation to participation.

“Master,” Peter says in Christ’s transfigured presence, “it is good for us to be here.” This expresses the heart of the worshiping church, who would have it no other way than to stay near the Lord on the holy mount. Once Christ the center has drawn all things to himself, there is no other ‘center’ to pursue, and no other desire unfulfilled. In this sense, Christian liturgy directs the gaze of the church toward the beauty of Christ the center, which is the sort of beauty that is not merely a spectacle, but compels us to participate in it.

Christian liturgy directs the gaze of the church toward the beauty of Christ the center.
Click To Tweet

In his well-known sermon delivered in Oxford in 1942 entitled the Weight of Glory, C.S. Lewis explains how the sight of God’s glory is necessarily participatory:

We do not merely want to see beauty, though, God knows, even that is bounty enough. We want something else which can hardly be put into words—to be united with the beauty we see, to pass into it, to receive it into ourselves, to bathe in it, to become part of it.

Whereas the liturgical journey may have begun with a reorientation to Christ the center, a new reference point by which all of life is lived, it is now consummated by a reality that is naturally participatory. The worshiping church is not external to the life of God, nor does it possess some nominal connection to Christ in the liturgy, rather, the church has become “partakers of the divine nature” (2 Pet 1:4).

Sacramentally the church is brought into the interior of God’s life, through the Son and by the power of the Spirit, not to merely spectate but to share in it through Baptism and Eucharist (1 Cor 10:16).

The center of the Christian liturgy is not religious sentiment, nor spiritual rhetoric, but the reality of Christ made personally present. Every liturgical movement and action has led the community of faith into its mysterious center, only to realize at the table that they are hosted by another. The Incarnate Christ stands at the center of the worship assembly and conducts every priestly act. The would-be worshiping spectators have now become guests at the Lord’s table, sacramentally co-opted into his life, death, resurrection, and ascension. No longer just looking upon Christ, the individual believers become living members of his Body, and are sent into the world transfigured by the encounter. 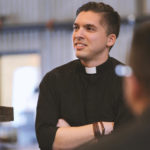 Shawn McCain is the founding rector of Resurrection South Austin. Upon completing an M.Div at Fuller Theological Seminary, he was ordained to the Deaconate in 2011, and the Priesthood in 2012. He and his wife Michelle have been married for over 13 years and are parents of five kids (with one on the way): Mateo, Maddison, Aubri, Braelyn, and Emery. Shawn is currently studying for a D.Min. at Nashotah House Theological Seminary on sacramental missiology. He is part of the leadership team of Always Forward, the Anglican Church in North America’s church planting initiative, and also a founder of 35 for 35, a cross-jurisdictional church planting initiative in Central Texas aiming to plant 35 new Anglican congregations along the I-35 corridor.