How to Have a Faith Conversation in Today’s Culture

In a post-Christendom culture, is it possible to winsomely engage someone in a conversation about faith? Bishop Todd Hunter says yes, and shares a few of his time-tested tips.

In her world-famous 1979 book Out of the Salt Shaker, Rebecca Pippert wrote: “Christians and non-Christians have something in common—we’re both uptight about evangelism.” As I remember it, the 1979 version had on the back cover: Faith conversations are more awkward than ever! In 2006, Christianity Today voted Becky’s book one of the top 50 books that have shaped evangelicals, and for good reason—its message remains relevant today.

Becky could not have known how accurately she was describing the ever-growing gap in understanding between churched and non-churched people in our culture. Today, the awkwardness of faith conversations is like a middle-school dance: boys lined up along one wall of the gym, girls on the other, neither group peaceful or confident about the ensuing conversation.

In today’s climate of hostility and polarized opinions, here are some of my best tips for engaging someone in a conversation about faith.

Strive to know your Bible and theology, but don’t get paralyzed by the thought: “I don’t know enough!” These days, Bible info is readily available on phones. You can stop to look something up, or just get comfortable saying, “I don’t know, let me look into that and get back to you…”

Your personal story of coming to faith and growing in faith is more powerful than you might imagine. If awkwardly stuck, just tell your story with gentle humility and sincere joy.

Start with where people really are, not where you wish they were. Talk to people on their terms. Think about it: Jesus always talked to people on their terms—Nicodemus; the woman at the well; Zacchaeus, etc. It is not compromise. It is gracious, hospitable and space making. It makes room for the other rather than sucking all the oxygen out of the conversation.

Pray for people. In 1985 John Wimber wrote a landmark book, Power Evangelism. It explores the biblical pattern that evangelism follows most of Jesus’ deeds of power. Similar to Becky, John could not have known that he is more right today than in 1985. One of the best ways to become open to God is to have an experience of him through answered prayer of some kind—especially healing. Of course, healing is not persuasive to everyone. Lots of people observed Jesus’ deeds of power and did not follow him. But in other cases, after a dramatic power encounter, “whole towns” began to follow Jesus. Offer to pray for your conversation partner and give God a chance to reveal himself experientially. 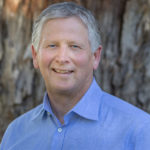 The Rt. Rev. Dr. Todd Hunter is the founding bishop of The Diocese of Churches for the Sake of Others and founder and leader of The Telos Collective. He is past President of Alpha USA, former National Director for the Association of Vineyard Churches, retired founding pastor of Holy Trinity Anglican Church in Costa Mesa, CA, and author of Christianity Beyond Belief: Following Jesus for the Sake of Others, Giving Church Another Chance, The Outsider Interviews, The Accidental Anglican,Our Favorite Sins, and Our Character at Work.