Skip to content
Previous Next
Slow Healing: The Role of Imagination in Mission

Slow Healing: The Role of Imagination in Mission

Pain and trauma are systemic, and they can happen on diocesan or provincial levels. When they do, our gospel imagination is often impaired. We asked Amber Haines of Christ the King Fayetteville to share her story of healing from trauma, and recovering an imagination for embodying Christ’s hope in the world.

In the past three years, I started attending and serving in an Anglican church, which has proven to be a place of healing and restoration for me and my family. After a season of personal trauma, my slow healing has also meant recognizing the effects of trauma in others, especially the way it shuts down the imagination. I’ve recognized in many a great brokenness in the realm of vision and imagination, which is troublesome in the Church, because what is hope without a vision of something greater to come? What is forgiveness without hope for healing? Imagination is key to hope. It is key to envisioning the Kingdom of God, not that we ever think up something untrue, but rather that we can “see the unseen,” the truest of all.

So it stands to reason that imagination doesn’t merely belong to individuals. We have corporate imaginations, as well, and that makes me wonder. If we’re to engage this culture and really embody the kingdom of God as the church, I wonder how a restored corporate imagination within the church might open us up to walk by faith in a world that doesn’t value faith. Could it be that the world just doesn’t have imagination for a life redeemed, because often we don’t know how to imagine it in order to live it, either?

I believe trauma may be deeply linked to our imaginations and how we use them. I’m sharing a bit of my story to explain why.

The working order of my mind was full speed then, wheels always spinning. I studied low at plant life and drank with my friends and worshipped Jesus in everything I could. It was all a play of imagination for me, kingdom of God in my husband’s skin and in the dirt beneath my children’s fingernails. I loved the church. I loved my life and the four boys I had birthed who companioned me.

We had been weeks in the hospital. I was holding Titus, our fourth son, in my arms when his numbers crashed, and they took him from me for testing. They said all they knew to do was to “make him comfortable.”  So when our infant son was dying, or when we thought he was, something happened to my lights. They went dim. My vision and my hearing tunneled. A knob dialed back, and life went from high definition and full color, to a fuzzy black and white.

Neuroscience explains more than I could about post-traumatic stress disorder, but I’ve learned a lot about it since our days in the hospital. Healing is an ongoing thing. I believe our walk with Christ is like that, too, ongoing. My healing has been happening for years, and my greatest struggle through PTSD has been my loss of imagination.

My greatest struggle through PTSD has been my loss of imagination.
Click To Tweet
I lost my meaning, my definitions, my sense of Trinity and kingdom living, maybe not so much in how I talked about it all, but it was gone from my imagination. I had lost my scriptural imagination and my ability to see myself as a born-again into God’s story. That part of my brain had flat-lined when they took Titus from my arms.

Hope That Weakness is the Way

Though Titus has not had a complete healing and still struggles with his health, our family has been in a healthy rhythm of recovery for five years now. Many of my prayers in the past five years have been that the Father would restore my ability to recognize the Trinity at work in my life, and slowly, the poetry has returned. As I continue to heal and ask for scriptural and prophetic imagination, I’m realizing just how important a redeemed and restored imagination is in the life of the church.

How might a restored corporate imagination open us to engage our culture?
Click To Tweet
Is it possible that we, ourselves, haven’t faced our own corporate traumas so we can embody, as The Church, a continual corporate healing? Is it possible, even, that tending to the corporate trauma of breaking from The Episcopal Church is actually the first step in giving witness to the Gospel in North America? I speak as an outsider or as a child here, as one who wasn’t around when the split happened, and yet, I’ve seen bone-deep pain in our brother’s and sister’s eyes. I’ve listened to the stories of the wounded on both sides, and honestly, I would rather not linger on the pain myself. We often like to move on as best we can, but I’ve learned that it’s hard to heal when we don’t tend to the wound, and healing often requires sitting in pain and grief. It can even feel like taking on more wounds.

Part of the continual healing of my imagination has been in writing about almost losing our son, and it has been in forgiving those who said painful things to us as we suffered.  Part of the healing has been in my apologizing to my children for leaving them on their own, for thinking I was the only one enduring such pain. Healing has come through therapy and by recognizing my addiction to my right answers when I hurt, instead of seeking God in the presence of intense pain. Isn’t He enough even there?

What have the traumas occurring within the church done to her imagination? We may have corporate woundings to face so that our corporate imagination might heal. In this slow work of conforming to Christ, I pray that we would engage our culture with a vision for its healing, with a vision for the Kingdom of God, by walking in honesty about our weakness, and from there, offering hope. Our crucified Christ is enough. 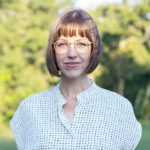 Amber C Haines, author of Wild in the Hollow, attends Christ the King Anglican of Fayetteville, Arkansas, is married to Seth Haines, and has four sons.