Skip to content
Previous Next
“The Gospel Has to Be Incarnated”: An Interview With Bishop Jim Hobby

“The Gospel Has to Be Incarnated”

In the next few months, we are interviewing bishops from around the Anglican Church in North America on engaging culture and best missional practices. First up: Bishop Jim Hobby of the Diocese of Pittsburgh, who attended the 2018 Intersection Conference. We ask Bishop Hobby about the challenges his churches are facing as they engage culture and where he sees God working in today’s world.

Q. Why do you think engaging culture is important?

Bishop Jim Hobby: Engaging culture is important for two reasons. First, we must take culture seriously as a target of transformation—the Church needs to have a place in transforming culture. It’s always been part of God’s plan to use his people to transform the world, since the call to Abraham to bless the people. Abraham saw culture as a target for transformation. Paraphrasing Abraham Kuyper, there’s not a square inch of the world that God does not claim as his own.

Second, we must recognize the importance of culture in communicating the gospel. The gospel is not something that can be tossed out there in some kind of supra-cultural way. It has to be incarnated, expressed explicitly within the culture.

In the Telos Collective, I see both of those things coming together—viewing culture as a target of transformation and taking seriously culture as a means or context of communication. I think it’s an important piece of what we need to be hearing and thinking about.

Q. What can stop the Church from effectively engaging culture?

JH: I grew up in a tradition that tended to go in one of two directions. Either we rejected culture unwittingly—I don’t go to movies, I don’t drink—or we ran after culture, like producing “Got Jesus?” T-shirts after the “Got Milk?” campaign. The church is usually not the place where folks are creating culture, offering up a distinct narrative. We let the world around us define the music genre and we put Christian words to it. There have been times in history when the church was the place where culture was being created, but we’ve lost lost our edge.

The church is usually not the place where folks are creating culture, offering up a distinct narrative.
Click To Tweet

Q. What do you see that Anglicanism has to offer our culture?

JH: First and foremost, we have the gospel. And we have the gospel in a rooted tradition, historically and liturgically. That is something our culture needs and is asking for. When everything around you feels like it has to be new and improved, we are able to offer something that is tried and true— something you don’t have to reinvent every week, month or year. It’s reliable and consistent. Anglicanism is global and thus offers a perspective that doesn’t get faddish. It has more of a sense of being rooted, finding expression in lots of different ways. As the Anglican Church, we’re in conversation with each other about what’s at the heart of our tradition.

Q. Where do you see God working in the world/culture?

JH: I think God’s stirring up a discontent in our culture that has a justice component. Folks are standing up and saying, “That’s not fair. This isn’t how the world should be.” That is expressed in both healthy and crazy ways, but underneath is an unsettledness in our culture that has God’s fingerprints on it. God is also working in churches that are embracing the idea of creating culture and engaging with it, thinking of church not just for Sunday morning but as a change agent throughout culture.

Q. What drew you to attend the 2018 Intersection Conference?

JH: There was a relational draw, wanting to meet folks thinking deeply about questions of culture. I was looking for a way of building partnerships and relationships as we move forward. Also, the content. I love the progression of themes that Telos Collective has put out over the course of five years: Gospel, Culture, Missional Ecclesiology, Missional Leadership, and God’s Empowering Presence. I’m already making plans to attend next year’s conference [on Missional Ecclesiology] and bring some leaders from my diocese.

Q. What was your favorite thing about the conference?

JH: Esau McCaulley‘s session was remarkable. I also enjoyed the panel discussions following the talks. Another highlight was the focus on ethics and justice—the transforming of culture—that came up several times in both Kyuboem Lee‘s and Jennifer McBride‘s sessions. All of the sessions were focused on starting to see a different kind of church, a different way of being that really is a transformed culture, not an anti-culture.

Q. What are the biggest challenges the Diocese of Pittsburgh’s churches are facing as they engage culture with the gospel?

JH: There are two sides to it. One, we often fail to engage the culture effectively, so there is a lot of rejecting culture—thinking culture is bad, or simply unreflectively adopting it. Our task is helping the diocese have a way of looking at the culture and saying, “OK, this is something that does need to be rejected,” or “We can wholeheartedly affirm this, or modify it and make it ours.”

The other challenge, equally important, is embracing the gospel. We can tell people about Jesus, but we struggle to communicate the message of the gospel in a way that connects with who they are and where they’re at—how they see their relationship with God and themselves.

We can tell people about Jesus, but we struggle to communicate the message of the gospel in a way that connects with who they are and where they're at.
Click To Tweet

Q. Can you share about churches in your diocese that are effectively engaging culture? How did they get there? What are their attitudes or practices?

JH: There are several. St. Stephen’s Sewickley has figured out the culture they are in the midst of, and created a church culture that embraces it to a certain level, but also transforms and challenges it. They are ministering with the upper-middle-class community, and an emphasis on excellence resonates with that culture. But St. Stephen’s is willing to challenge the self centeredness of that culture and how people use their money, calling them into deep community.

Church of the Ascension is also connecting well with their culture. They have a very diverse congregation, and lead an English as a Second Language ministry with students that’s been impressive. They are navigating the issue of culture—in their case, world cultures—and how to explain the gospel there.

Seeds of Hope Church is engaging culture in a primarily African American, poor part of Pittsburgh. They’ve done a good job of exegeting their culture. The music they use for worship comes out of Black culture. They also recognize the need to reach children, so they have a remarkable children’s program in the summer.

Q. What encouragement can you give clergy who are on the ground engaging missionally?

JH: Keep up the good work. I tell my clergy that it’s hard work. If you really are trying to engage culture around you missionally—and not simply offering a product and hoping people will come—it’s hard. You’re not only exegeting scripture and keeping things running, you’re exegeting culture and finding the place of connection. That’s hard. It’s hard to avoid getting sucked into the vortex of church ministry and keeping the organization going. Partly, it’s because we don’t train clergy to do it. We don’t train them to figure out how to engage culture and listen to the dreams and places of pain that our culture is expressing.

If you really are trying to engage culture around you missionally—and not simply offering a product and hoping people will come—it’s hard.
Click To Tweet

Q. Do you have any suggestions for reading or other missional resources?

JH: Roland Allen would be at the top of my list. I also like David Garrison’s Church Planting Movements.  I would recommend Designed to Lead by Eric Geiger, The Tangible Kingdom by Hugh Halter and Matt Smay, and Making Sense of God by Tim Keller. I also like Church Planting: Laying Foundations by Stuart Murray—and he has written a few other books on church planting that are really good. 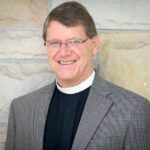 Bishop Jim Hobby was consecrated Bishop of the Anglican Diocese of Pittsburgh on September 10, 2016. Previous ministry experiences, as an Episcopal and Anglican priest (in small and large churches) in the Dioceses of Pittsburgh, Connecticut, Florida and Gulf-Atlantic, were part of his preparation for his new ministry role. His passions are teaching and preaching, whether academic courses or in the parish context. Another passion is missions, particularly in spreading the Gospel of Jesus to those who have never heard it in their particular culture or language. He has served as the US Mobilization Director for Global Teams, a mission sending agency, and as the Director of Ethne Mission Networking and Equipping.