The Telos Collective relies on the work of the Spirit to enable everything we do, so we were curious what that work looks like in the different churches and dioceses in our midst. After exploring how the Spirit’s presence and activity manifest in an evangelical Anglican church, we asked the Rev. Phil Berghuis of Saint Columba Church to reveal the shape of the Holy Spirit’s work in an Anglo-Catholic context.

By the Rev. Phil Berghuis

The normative way people observe the Holy Spirit acting in Anglo-Catholic churches is through the sacraments and liturgy. I say “normative” because, while this is the regular way the Spirit is seen to act, it isn’t the exclusive way. One example is the sacrament of confirmation. Rather than emphasizing the confirmand’s public profession of faith, the sacrament manifests primarily in terms of what God is doing in the confirmand. He or she has made a profession of faith, but in confirmation, the Holy Spirit’s role in that person’s life is strengthened. Not to say that the Holy Spirit wasn’t working before, but now the Spirit is in abundance.

Anglo-Catholics are quick to lift up liturgy in part because they see it as the primary vehicle through which the Spirit works. This also explains why Anglo-Catholics are quick to pull aspects of liturgy and the sacraments into other areas of life. For example, instead of the more modern concept of prayerwalking, many Anglo-Catholic churches do processions around their church property and neighborhoods, to bring the liturgy outside the bounds of the church building. One church I attended was located near the city’s annual Asparagus Festival, so the rector scheduled a “blessing of the asparagus”—asking God through the Holy Spirit to bless not only the festival itself, but the asparagus laborers in the community.

Anglo-Catholics lift up liturgy because they see it as the primary vehicle through which the Spirit works.
Click To Tweet
The Spirit also works heavily in the lives of individual Anglo-Catholics. The emphasis is not on the charismatic gifts but on the progressive sanctification of the believer through the Holy Spirit. This sanctification on a personal level is connected to and fed by the role of the Holy Spirit in the sacramental life of the church. This sanctification may result in some of the gifts of the Spirit, but most often it cultivates virtue and the fruit of the Spirit. I once had an Anglo-Catholic priest tell me, “The only spiritual gift I regularly ask and pray for is the gift of love.”

I think this role of the Holy Spirit can be harder to discern in the short term, in single instances, but the long-term impact is without question. It reminds me of the early presence of Anglo-Catholicism in the London slums. Sanctification is what drove the priests to seek such a selfless ministry. Their continual sanctification by the Spirit and the subsequent sanctification of their parishioners not only built up the churches, but dramatically affected the slums around them, transforming their whole community.

But the Spirit doesn’t only work to impact the lives of Anglo-Catholics, the Spirit also works strongly in Anglo-Catholic spiritual life. As Paul said in Romans, “We do not know how to pray as we ought.”The Spirit works in the believer to draw them to God in prayer, and Anglo-Catholics can look to the rich history of the Church to see how the Spirit has worked in others—the Spirit can still impact us today through their lives and teachings. Many Anglo-Catholics read the lives and spiritual works of Carmelite saints like Ss. Teresa of Avila and John of the Cross.

Scholar Jaroslav Pelikan says, “Tradition is the living faith of the dead, traditionalism is the dead faith of the living. And, I suppose I should add, it is traditionalism that gives tradition such a bad name.” The Holy Spirit gives life to the tradition of the church to make it a living faith. The Holy Spirit may not seem to be working in Anglo-Catholic churches the same way he does in other church settings, but that’s not to say he isn’t present and working. 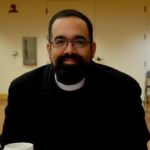 The Rev. Phil Berghuis is Curate at Saint Columba Church in Fresno, California. He graduated from Nashotah House Theological Seminary in May 2015 with a Masters of Divinity.  Phil is excited about pastoral care, worship, preaching, being a part of the community, and teaching about Scripture and the history of the Church. For fun, he enjoys reading, films, and comic books.