Skip to content
Previous Next
Why Anglicans Need an Anabaptist Perspective

Why Anglicans Need an Anabaptist Perspective

We asked some attendees of the 2019 Intersection Conference to share their thoughts on the session that most impacted them. Here, the Rev. Seth Richardson of Christ the King Fayetteville reflects on David Fitch’s evening lecture, “Beliefs vs. Practices: How God Shapes a Church For Mission.” David Fitch is the B. R. Lindner Chair of Evangelical Theology at Northern Seminary Chicago, IL and author of a new book, The Church of Us vs. Them: Freedom from a Faith That Feeds on Making Enemies.

I’m convinced that Anglicans in North America who are seeking to articulate and embody a missional ecclesiology need a healthy dose of an Anabaptist perspective. If we listen well, we will find fresh resources for reimagining what it means as Anglicans to bear cruciform power and live sacramentally amidst the unraveling of traditional social, religious, and institutional modes of life.

There is a kind of historical irony to the suggestion that Anglicans can listen to and learn from Anabaptist voices. Perhaps we should have started long ago, but especially now, as the Church faces the loss of previously held socio-cultural power, we can no longer drown (figuratively) Anabaptist voices with shouts of “metaphysics.”

As the Church faces the loss of previously held socio-cultural power, we can no longer drown (figuratively) Anabaptist voices with shouts of “metaphysics.”
Click To Tweet

It’s not that metaphysics are unimportant, of course. The ontology of the church and the real presence of Christ in the Eucharist are necessary and central for the missionary task. But merely (re)asserting what we believe about what’s going on in the Eucharist is not sufficient for answering the question, How do we lead a church into mission?

Dr. David Fitch has been a provocative Anabaptist voice at the Intersection Conference for three years now. This year he pressed into that “how” question in his evening lecture.

Haunted By the “How” Question

As a priest who leads a church plant, I am haunted (in a good way) by the “how” question. It keeps me sober to the reality that the most important task is cultivating a way of life on the ground that makes a difference in people’s lives.

I’m convinced that Fitch’s persistence in asking “How does this make a difference?” is not merely a practical question that functionalizes the identity of the Church. This question is irreducible from the visibility of our sacramental convictions in and through our social practices (see 1 Cor 1:17-34).

For Fitch, tending to the “how” question begins with (re)learning the fundamentally practiced, participatory character of the Church’s identity. “What do we mean by ‘church’?” Fitch asks. Do we primarily mean an article of belief to which we assent, or a way of life we practice together? “If no one shows up for church, does it still exist?” Fitch quips.

Fitch seeks to reframe our point of reference for what church is around the concrete, socially embodied character of the Church’s life. The point for Fitch is not the difference between inaction and action (as if moving into mission looks like getting busy doing things), but rather cultivating alignment between practices and beliefs, which gets worked out through one, embodied way of life.

Fitch seeks to reframe our point of reference for what church is around the concrete, socially embodied character of the Church’s life.
Click To Tweet

Reckoning With the Problem: Church Got Conceptualized

We cannot fully appreciate the bite of Fitch’s proposal apart from reckoning with how belief got abstracted from the practices in the Church’s imagination. “Church got conceptualized,” Fitch says, which means that assent to articles of belief took on its own coherence apart from the socially embodied context of the Church’s life (as if the oneness of the Church were merely a concept to be affirmed/enforced, or Christ’s real presence merely a question of what is signified in the Eucharistic prayer).

We may be quick to retort that the Church’s identity includes both beliefs to affirm and the practices that enflesh belief. Yet, Fitch’s goal is not to bring a balanced perspective, but rather to provoke among us the realization that we are inheritors of an ecclesiology in which belief has been abstracted from practices. Without reckoning with how conceptualized church has become, we will end up extending the underlying problem under a facade of seemingly new strategies.

Fitch’s goal is not to bring a balanced perspective, but rather to provoke among us the realization that we are inheritors of an ecclesiology in which belief has been abstracted from practices.
Click To Tweet

Thus, the helpfulness of Fitch’s argument depends upon the degree to which we are ready to own up to the reality that there’s a problem.

For one, I am among those who sense a problem. There is an ecclesiological instinct, more implicit than explicit, that assumes if we’ve defined and defended what we believe about the Sacraments or our position on a cultural issue, then we’ve gone a long way to doing the necessary work, and all there is left to do is make a policy around that belief that we enforce from place to place, like a blueprint for our liturgical franchise.

Although the history is perhaps more complicated than Fitch outlined, we didn’t get here by accident. The extraction of beliefs from practices happened within a historical genealogy of political, theological, and philosophical shifts that made possible the ability to consider the Church’s being apart from the socially embodied practices that make visible and are inseparable from being.

The consequences of this extraction are not merely academic and theoretical. Much dehumanizing damage has been performed by ecclesiastical bodies with carefully articulated articles of belief. When belief is extracted from practice in a context, it almost always results in coercion, Fitch says.

When belief is extracted from practice in a context, it almost always results in coercion.
Click To Tweet

Fitch is getting at the same kind of issue William Cavanaugh (another friend of the Telos Collective) is getting at regarding the effects of inverting the Eucharist as the mystical body of Christ and the Church as the real body of Christ (both relying on the work of Henri de Lubac). The difference, perhaps, is Fitch’s persistent refusal to participate in discourse abstracted from our concrete lives. His refusal is a deeply theological move nurtured from local, embedded pastoral work.

Praying the Epiclesis in McDonalds?

The point is that in a world where church has become conceptualized, where people are fed up, wounded, and cynical, we step into mission by practicing a way of eating in common spaces shaped by the eschatological intrusion of Christ’s presence by the Holy Spirit. Praying the epiclesis is thus a social practice that shapes the way we inhabit common places, connects us to persons in common places, and makes visible Christ’s presence to a wounded world.

We step into mission by practicing a way of eating in common spaces shaped by the eschatological intrusion of Christ’s presence by the Holy Spirit.
Click To Tweet

For some astute Anglicans, it would be helpful for Fitch to clarify that a sacramental practice like this does not work by analogy. That is, the epiclesis (or the Eucharist more generally) is not an idea that informs what we should do. Rather, Christ’s presence really does intrude in and through the practice, not only making real presence, but also making us into Christ’s body in common space.

Fitch consistently overstates his case. He does this consciously. But he does it understanding that sometimes chemotherapy is required to heal a diseased system. A little prophetic exaggeration can go a long way to helping us Anglicans wake up. This is important to name because the blind spots in the Anglican parish I serve will be different than the non-denominational mega church down the road.

A little prophetic exaggeration can go a long way to helping us Anglicans wake up.
Click To Tweet

As Anglicans seeking to lead the Church into mission, we must discern what it means for us, in view of our strengths and blind spots, to nurture a way of life embedded in specific places among particular bodies. Yes, this way of life is dependent on and sustained through participation in Christ’s real presence, but the point for us is how contextually vital it is to lean forward into the social, visible, practiced character of that life.

I agree with Fitch that this means, in some contexts and situations, the work of nurturing a social, visible, practiced life that can be a substantive witness amidst a hurting world will take precedence over energy spent reasserting a theological belief.

Perhaps this Anabaptist perspective can help shape our posture toward one of our current predicaments, women’s ordination. What if, instead of only sharpening arguments for or against, we set about locally to cultivate practices where women are genuinely empowered to lead as full members of Christ’s body, where men are actively divesting themselves of power over others, where we are naming and repenting of our complicity in broken systems that dehumanize and objectify, lamenting the pain that exists in us and our world?

Perhaps this practice could birth both a missional witness and shape our body for a surprising future we could not have known otherwise.

Listen to David Fitch’s full talk, Beliefs vs. Practices: How God Shapes a Church For Mission.” 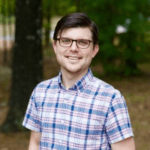 Seth Richardson and his family live in Fayetteville, Arkansas, where Seth is Rector of Christ the King Anglican Church. He most often thinks and writes about spiritual formation, sacramental theology, and place. He probably drinks too much coffee.